I’m prepared to admit that I’m a jewel snob. And I’m also going to be a cranky pants.

I’ve had enough of bracelets stamped with your ‘bespoke’ word, like ‘love’ and ‘peace’ and ‘harmony’. And maybe your children’s names (like, really? are you going to forget them?).

I love words, but I also know the limits of words. Not only for the constraints on what they can express to other people, but also on what kind of meaning they can create for ourselves.

Oh, and while I’m on the topic of pet peeves, I’ve also had enough with $20 pendants of chunks of crystal wrapped in some cheap industrial metal and being sold as a ‘symbol of spiritual abundance’…. So ‘fast food’.

Don’t get me wrong, I’m all for symbolism.

But there’s something out of whack here.
Words only represent ideas in very limited ways. While symbols, on the other hand, are so much more than what most people think… So, warning, soap box ahead!

Words are stand-ins for ideas. They hold the position of the main actors, in their absence from our minds. This is what makes them so extraordinarily useful. And seductive.
You don’t need the real thing to be always present if a word can recall it at will.

It’s the power of grammaring!**

That’s why the Word of God worked so well for Christians, evoking the presence of the divine authority without him actually having to be there, in church and so forth.

It’s also why words play such a huge part in magic rituals – abracadabra and all that.

I don’t, by any means, underestimate the power of words.

However the symbol offers us so much more. Layer upon layer, we can peel away meanings to reveal new vistas, like the difference between binoculars & the Hubble telescope. Which is why I am so irritated by the ‘fast food’ version of the symbol. Like the news story in a tabloid, it’s designed for easy sales, easy digestion, and it offers no real insight.

The thing about symbols is that they’re not immediately understood.
You can still be chewing over their resonance and meaning long after the first encounter. Despite what dream dictionaries and Dan Brown would have us believe, they aren’t about attaching clear & precise meanings.

This makes them very different to words. So when you use them like words, to ‘represent’ something, you’ve missed 90% of the story.

Representing is what ‘signs’ do – they spell stuff out, sometimes with pictures.

When I was a (very bossy) lecturer it would so get up my nose when one of my jewellery students started talking about her project: ‘Well, this symbol represents my love for…’.

Go beyond representation I always say, keep following the idea down rabbit holes.

Find out something entirely new, or unexpected, or paradoxical.

Symbols open portals to meaning, they don’t close them down.

Symbols follow a similar process to manifesting. There’s been enough out there about manifesting, so that you know by now that manifesting is not about writing the list and handing it over to the Universe to do your bidding. It’s about the feeling, and about being present in that feeling.

Symbols open vistas along the road of continual becomings.
They accompany us into wordless places where meaning is in our being.
It happens regardless of whether we’re even thinking about it.

A symbol is a material (i.e. visual, aural, tactile, sensorial, perceptual) key that unlocks a door into a greater reality. It’s a tele-portation device through which the numinous manifests. It takes the vast power of the cosmos (untrammelled by thinking) and it brings it down to earth, and holds it against our breast, or wraps it round our finger, or sits it on the table in front of us.

It brings the inexplicable into experience.

A piece of jewellery doesn’t have to be symbolic, although there is something about jewellery that means it is perfectly primed to be so.

Why is this? Perhaps because we wear it, maybe everyday, and like any well-loved object that we live with, it becomes part of our definition of self. It’s a familiar presence with us, giving reassurance or succour to our in-conscious self. (The conscious rational self is probably taking no notice, or else it dismisses the effect.)

For a symbol to ‘work’ for you, you have to become present with it. You live with it. You wear it. It sparks off whole flights of thoughts, ideas, dreams taking you to new lands.

And the most fascinating part – we probably never had intended this when we first saw it, purchased it and started wearing it.

This is one of the things that makes a piece of symbolic jewellery so magical.

[**Piece of trivia – because I just love this stuff, and maybe you’ll find it as scintillating as I do: the witch’s Grimoire (aka the Spell Book) has a connection to the word ‘grammar’ via the Scottish word ‘gramarye’ which means ‘occult learning’. And the word ‘glamour’ is also derived from ‘grammar’. Who would have thought something so dull could have such a secret past???] 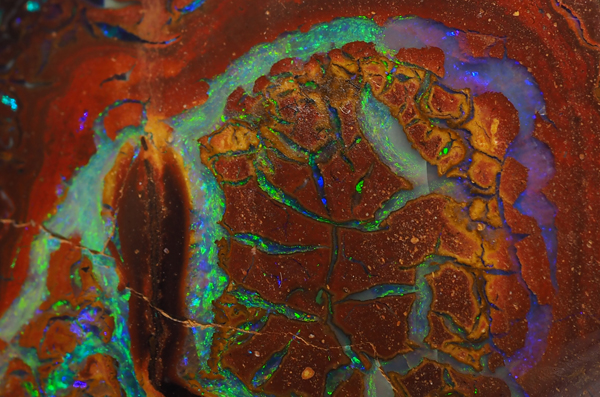 Lately I’ve been immersed in the extraordinary beauty of opals. No other stone can deliver quite the character that opals can. Don’t get me wrong – I love many gemstones, but I believe that when we’re…

Half the population consider Valentine’s Day the most romantic day of the year and a great excuse for a night of indulgent dinner and loving each other up. The other half of the population (the cynics…

When it comes to materials and materiality I am on a mission – to restore the value of material things, to re-align our thinking about materiality. By this I mean not only how we relate to…

Ok I confess, I’m a word nerd. There was a time in my now dimmed past when my fav way to spend a Sunday morning involved a toke, a dance around the lounge to a most…